It's getting harder and harder to get Lincoln to stay still for pictures.  Ben did a good job of containing him for a few shots.  Looking at these pictures makes me laugh because Ben totally doesn't look like himself.  His hair is never plastered down like that...these pictures were taking right after a bath and a hair brushing. :) 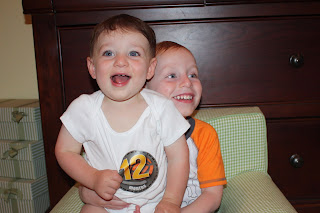 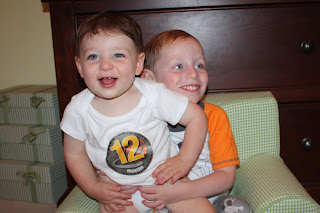 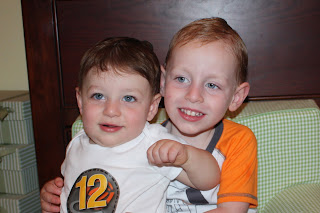 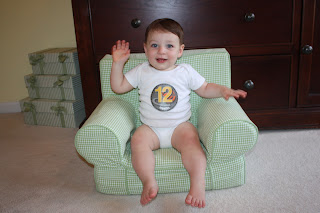 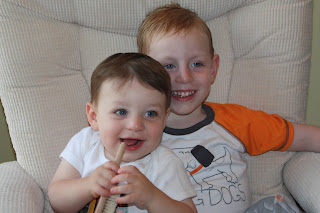 The biggest update since his 11 month birthday was that he can WALK.  He is almost running.  It happened so fast.  He is loving being able to get around so easily.

He claps all the time, waves pretty consistently, dances when music comes on.  He also has started pointing at everything.  I am not sure if he actually knows what it means (or means something by his pointing), but he will find that out soon enough.

He babbles "mamama" and "dadadad" and "bababa" but so far, they don't have any meaning.

Peek a boo is definitely his favorite game.  He also likes musical instruments, anything with buttons (phone, remote, computer, etc.), and pretty much whatever Ben is playing with.  And he puts EVERYTHING in his mouth.  (This is kind of different from Ben so it's new for me and very annoying.  Can't wait until that stage passes!)

He's still into everything and now that he's walking, it's even more difficult.  If he can reach it...he will. And then he will get mad when you take it away!

I tried a week of one nap and he seemed a little cranky.  I went back to two naps, but we take some liberties with the naps depending on what's going on.  I'm still looking forward to a consistent one-napper but I alway to make sure he gets the sleep he needs.  Maybe next month!

Lincoln is a great eater.  I try to give him at least a portion of whatever we are having for dinner.  I'm pretty much done with purees (although sometimes I give them to him to make sure he's eating enough veges).  The amount he eats depends on his mood, but all in all, he eats a good variety of food.  We have transitioned him completely to whole milk and I'm in the process of transitioning away from a bottle.  As usual with him, his attention span for a bottle is getting shorter and shorter.  He's doing great with the sippy cup and didn't seem to notice the switch to milk.

I can't believe the first year is behind us.  What an adorable, happy toddler Lincoln has become right in front of our eyes.  I love watching him learn about the world around him.  He and Ben are starting to interact more and more and all I can say about that is - watch out Ben! haha.  Lincoln will be the "tough" one on this relationship! :)

Happy happy birthday Lincy!  We love you so much.  Thanks for keeping Mommy on her toes. :)