This week, Ben turned 13 months old. Here's a little update on what's going on with him:
- He's babbling a lot more and making all sorts of sounds....stringing them together. He has a conversation with us, himself, or the telephone that makes absolutely no sense. He still isn't saying any actual words at all, but his sounds are very cute! He is liking the "z" sound a lot.
- As we've mentioned on here, since his 1 year birthday, he's learned to clap, point and do "so big." He's also developed a love for light switches (maybe because they are a different kind here than we have at home?) and opening/closing doors.
- He still loves musical instruments of all kinds, but his favorite "toy" is anything with buttons (e.g., the car key, remote, phone, cell phone, computer, etc). I suppose he always loved these, but with his sounds and his pointing, he's VERY obvious about it now.
- He is still pulling up, cruising, and crawling and not showing too much interest in walking yet - still thankful for that!
- Still only 7 teeth....should we be worried that the 8th tooth isn't coming? Ha!
Every month, Ben learns new things and we learn more about his little personality. Love you Ben!!
These are some cell phone pictures from the last week or so...
We tried a new class in DC and they had a ball pit. We didn't do too much else since Ben was fascinated! 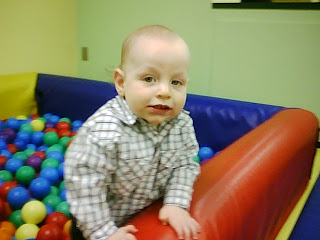 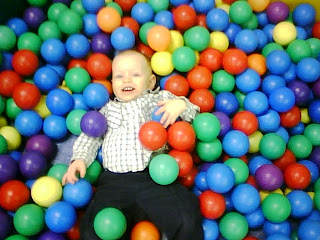 As mentioned in a previous post, we were home for a night for Gavin's birthday party. Ben was so happy to see his table again. 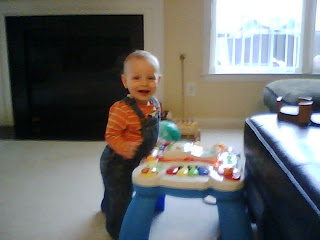 While home, we checked out the new and fantastic Whole Foods! Nick was in heaven. Ben at the park last Friday. 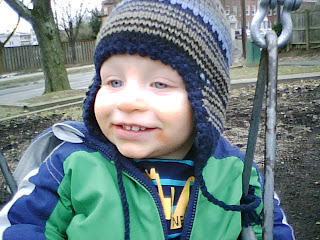