Today, Lincoln is 5 months old! Here's what he's up to...
- He's becoming more and more aware of his surroundings. Unfortunately this leads him to get over stimulated when we are out and about and it's difficult to feed him anywhere but home. Hopefully he will grow out of this!
- He's talking a bunch, giggles at a lot and jumps like a champ (in his jumparoo). One of my favorite things is when he just watches Ben with wide eyes and makes very loud sounds like he's trying to communicate with his big brother!
- He's getting much better at using his hands to grab for things and bring them to his mouth. At my 4 month update, this was inadvertent. I think he does it on purpose now. However, he has trouble holding on to things for more than a minute or two.
- He has discovered his toes and likes to chew on them. Actually, he likes to chew on everything! He has a very strong gnaw and is definitely more oral than I remember Ben being.
- He has been sick for the last few weeks, but we are hoping he's finally doing a little better. A trip to the doctor tomorrow will confirm if his bronchiolitis and ear infection are gone.
- His schedule hasn't really gotten any more predictable than it was last month. However, he's better at napping in his bed.
- The biggest (and most recent updates) are that Lincoln is sitting unassisted (for short spurts before he slowly topples over) and he started eating some baby oatmeal. He seems to like it so far although I look forward to giving him something tastier later this week.
Happy 5 months, Lincoln! I'm loving watching you grow and learn about your surroundings. :) XOXO 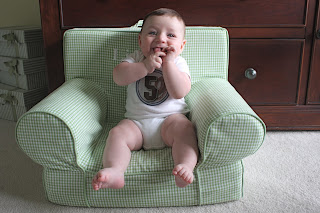 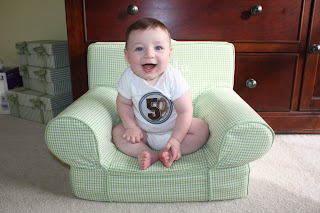 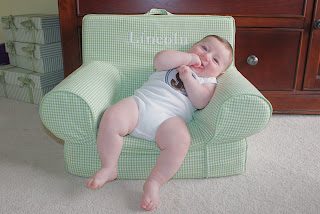 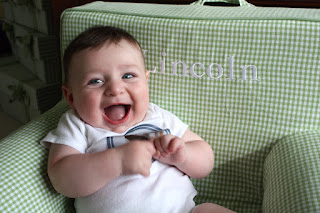 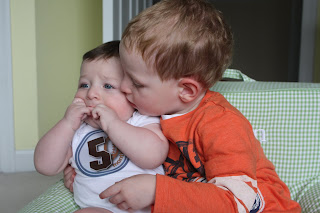 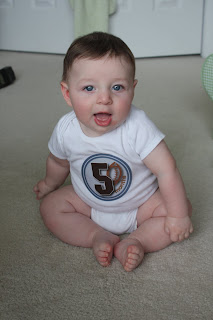 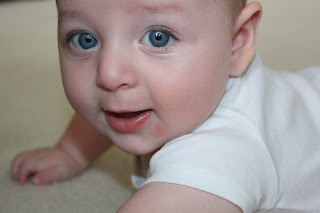 Is he drooling a lot? It looks like some of his shirts are wet in his photos. He may join Jack in the bib club!!