It's been a busy day. We went to check out Colleen and Brad's new house - BEAUTIFUL! They are all grown up with a real (unattached) house! I'm so impressed with how much they've unpacked already having moved in yesterday.
Then we went to Gymboree where Ben had more fun than usual and replaced his cries with giggles during the parachute time. Then a Target run completed our day of outings to pick up some new food items....
Our little Benny is not so good at the solid foods. He dodges the spoon making his mom quite crazy during feedings. One of the suggestions I've received (since I've been asking lots of people for advice) was to give him another spoon to play with. Well that worked for about 30 seconds until he threw the 2nd spoon on the floor. So the doctor suggested we try "puffs" to see if he could possibly be ready to pick things up and feed himself...thinking that he may just not like the texture of the pureed foods and we might have success with table foods. Well......he wasn't so good at picking the puffs up and putting them in his mouth and was quite confused as to what to do with them if they made it into this mouth. However, having a few puffs on the high chair allowed me to give him an entire helping of carrots due to his complete distraction! He thoroughly enjoyed the concept of trying to pick them up. Yea! Those puffs are sticky when wet...check out the one on his chin. :) 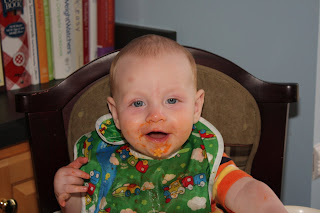 Yes, that's Ben's first real bruise on his forehead. Knowing he's going to be an active little boy, I'm preparing myself for lots of bumps and bruises. This one was the result of a roll into the side of the crib. Poor guy!
Posted by Kristin at 5:19 PM