Last Thursday, Ben started preschool. He will go on Thursday and Friday mornings from 9:30 to 12. The first day was a sort of "open house" where the parents had the option to stay to get a feeling of a typical day and make sure the child settles in. I chose to stay the whole time. I had told Ben I'd stay, so I didn't want to leave, but primarily, I wanted to see how the day would go. I have to say it's really really weird for me to think that Ben will have 2 1/2 hours twice a week where I won't know exactly what he's doing. This has never happened before. Even on the rare occasion that I've left him with a babysitter, I could ask the babysitter exactly what they did while I was gone. Unless I want to become a completely neurotic parent and quiz the teachers at the end of each day with everything, I'm just going to have to trust my instincts that the school is a good school and that Ben's having fun (unless I hear otherwise).
So back to my recap...
In the morning on Thursday, Ben was really excited. First, he wanted a picture with Lincoln who was set for a morning with Daddy, wearing his "My Daddy Rocks" T shirt. 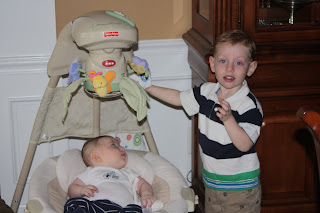 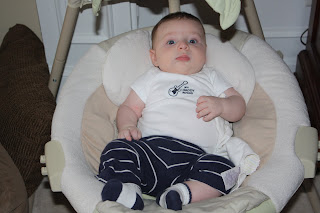 Then we tried to get a picture of Ben all ready for school, but honestly, he wouldn't stop dancing and showing off his backpack. He was quite excited to go to school just like Sid the Science Kid! 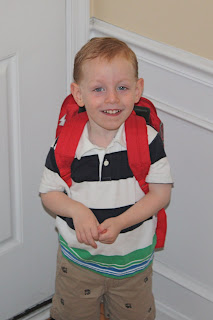 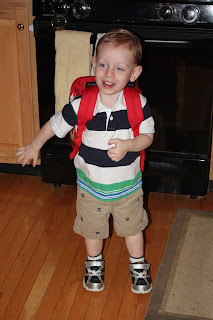 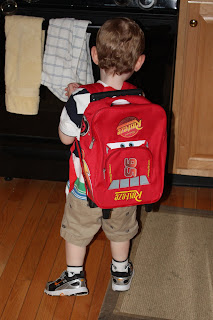 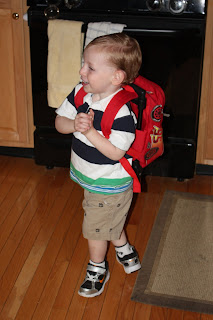 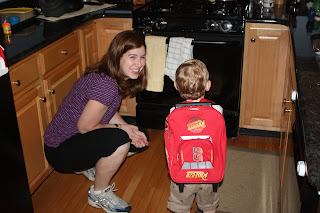 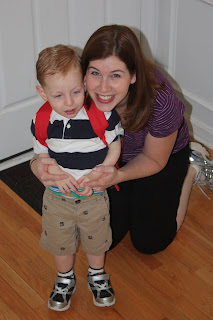 So on that first day, Ben played with play dough, made an acorn out of tissue paper, played with toys, had a snack, played in the gym (it was rainy), had circle-time where he sang some songs, and had his first lollipop.
The second day, I was about as emotional as Ben was. One of the hardest things that I have ever done was walking away and letting someone else console my child. "Mommy, I want to hold your hand" and "Mommy, I want to sit on your lap" while he was holding onto me tightly made walking out of that school nearly impossible. However, with a mom who was a preschool teacher, I knew that lingering would be the worst thing I could do. According to the teachers, he was fine soon after I left...but from what they told me, it sounded like he got a little special attention throughout the day.
As I wrote earlier, I am not going to like not knowing what Ben is doing while he's away from me. All I really got from Ben about his second day at school was that he saw a big bug out the window. I guess I better get used to him being on his own a little bit each week.
Ben's favorite thing about school so far is the "Teddy Bear Teddy Bear" song and dance. Tomorrow, he is going back to school and when I asked him what he was excited about, he said "Snack!" Let's hope he enjoys more than that. :)
He seems like such a big boy going off to school! I'm praying that in a few weeks, he'll be begging me to take him to school and having no trouble saying goodbye to me when I drop him off!

I'm proud of my Godson. Have fun at school, buddy!