So here is how the day went:
After we went to a little township Halloween party on Monday and Ben wore his Fireman Halloween costume, I learned that having a jacket for a costume is not ideal. He striped his jacket off pretty soon after arriving and didn't want to wear the big plastic hat. Since the Halloween events at school were going to be a few hours long, I decided to come up with another costume idea for today. I remembered his train engineer costume from last year was a 2T/3T and figured it would still fit. After undoing the quick sewing job I did last year to shorten the straps, he was ready to go to school. I dropped Ben off in his classroom and went upstairs with Lincoln to wait for the parade.
Unfortunately, I was feeding Lincoln and missed the BEGINNING of the parade where my adorable train engineer was the leader of the parade. His face was hysterical. He walked out holding the Director's hand and looked like a deer in headlights. The purpose of the parade (in addition to being an adorable spectacle for the parents) was to raise money for Unicef. The kids walked around with Unicef boxes to collect change from the parents. Since the kids were all only 3 years old (the rest of the school will do their parade on Monday), the idea of walking in a line around the circle of parents was quickly lost. Kids were everywhere. I got a little sad because I think Ben was looking for me and it was really hard to get his attention. 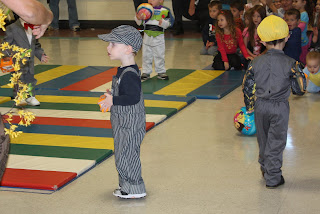 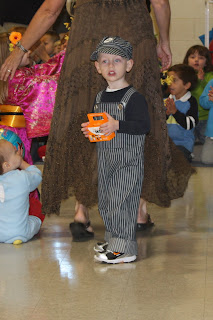 Eventually, a teacher took his hand and showed him how to walk around and collect change from parents. 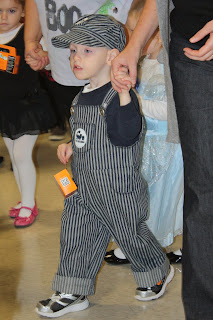 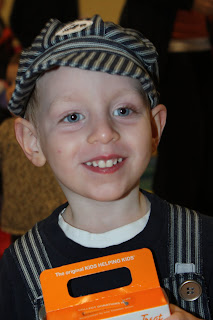 He got some money from other parents, including Kate's Dad, Jon. 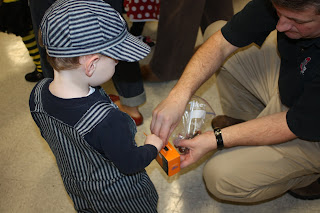 But then had a much better idea. He grabbed my cup of change, took it over to a nearby table and chairs, sat down and emptied my change (which was supposed to be for all the kids) into his box. 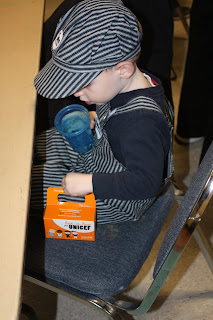 Having "filled" his box, he decided it was playtime. 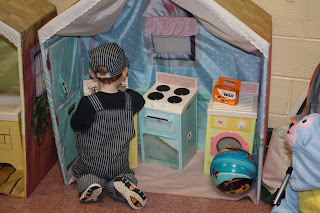 When the money collecting part of the parade was over, the kids sat down and sang Halloween songs for the parents. Again, there were people everywhere and I had a hard time getting pictures of Ben when someone wasn't walking in front of me. These are some of my best ones. 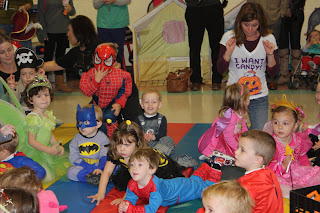 Kate was an adorable Mini Mouse. 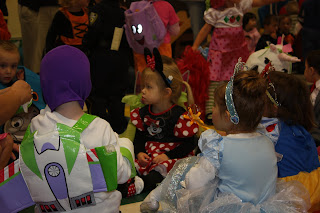 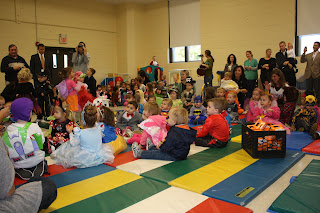 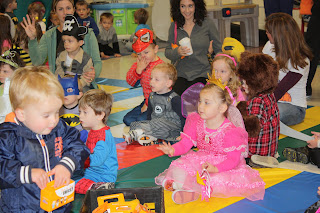 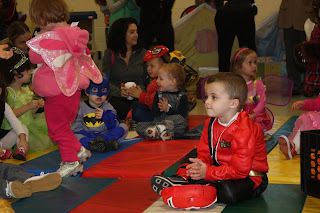 After the parade, the party continued in the classroom downstairs with fun Halloween treats including a bug made from cheese and pretzels! Ben also enjoyed a ton of frosting and a few cheese balls. You know, really healthy stuff. 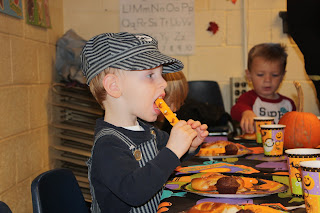 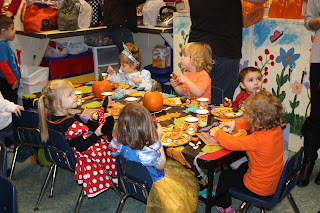 While attempting a game of musical chairs (3 is too young for that one!) Ben stopped to give another boy (who is much bigger than he is!) a big hug. 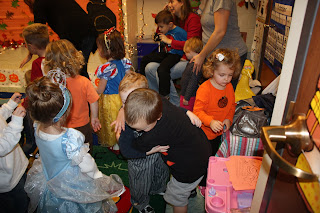 This is how Ben "marched" around for musical chairs. As with dancing, it must be done with his hands in the air. 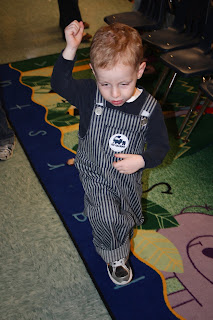 A game of Freeze Dance had Ben coming up with some new moves. This one was copied by two other kids. My son, the trend setter. 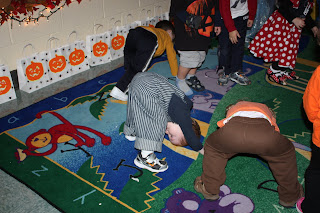 I explored my inner preschool teacher and read some Halloween books to the class. 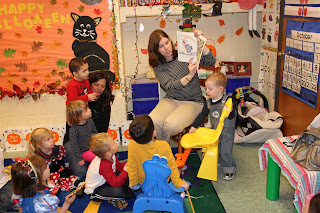 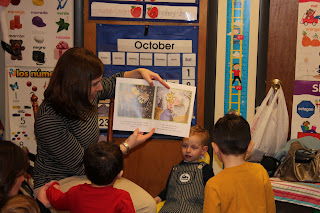 The party ended with the kids getting Trick or Treat bags (which they had made last week) containing little Halloween presents/treats from a few of the moms (candy, pretzels, stickers, spider rings, etc.). I think Ben had a great time! My favorite part was when they were playing Freeze Dance. I was thrilled to see Ben dancing up a storm even more than he does when we have our dance parties at home. I hope he is that outgoing at school when I'm not there. He was having so much fun.
The only bad part is that I wish I had gotten more pictures and that I had been able to help out even more, but Lincoln was with me and took about halfway through the party before he fell asleep. He was very interested in looking at EVERYTHING in Ben's classroom. I was trying to get him to sleep by bouncing him around in the ergo during the craft time. The kids made little pumpkin faces with foam stickers. It was really cute! I think maybe for the next classroom party, I will find someone to watch him at home so I can give all my attention to Ben. Oh well, lesson learned.
Posted by Kristin at 3:27 PM