Lincoln is getting so big! It's hard to believe he's already 4 months old. I'm sure I'll be saying that every month from now on. We are a day late with this because yesterday was such a busy day. Regardless, here are some of the things he's up to:
- He's "talking" a TON and very loudly. I don't remember this with Ben, but he's such a little chatter box. Ben copies me and says "Really Lincoln?!" whenever Lincoln's chatting away.
- He smiles a lot and has a full belly laugh that's AWESOME. I remember loving that with Ben and it's still the greatest sound ever. I will have to get it on video.
- He is grabbing for things, sometimes inadvertently, and brings them immediately to his mouth. Speaking of his mouth, he's drooling a ton and often needs a change of clothes simply because of that.
- He's still not rolling over. We've had two accidental rolls, but he hasn't figured out how to do it on purpose yet.
- He is in love with the Jumparoo and is using it better than I would have expected. He gets the thing moving so well and loves every minute of it.
- His schedule still fluctuates quite a bit (I'm putting some of this stuff in there because I wish I remembered details like this about Ben.....I'll want it for the next baby. :)). He is taking about 3 naps a day and we are still working on getting him to sleep in the crib for his naps. He does ok, but still sleeps best in his swing. He often makes it through the night with only getting up once, however, he has a little cough now and seems to be getting up more often. I'm hoping the last two nights are not a new norm because I'm tired!
- He seems to STARE at our food when we are eating. The pediatrician says he's ready to start solids, but I think we are going to wait a little longer. I'm hoping he won't take after his brother and will gobble them up when we are ready to start.
- I'm going to say this very generally....he thinks he can sit. He loves to be sitting up and does pretty well if I prop him with my leg or something in front of him to lean on (i.e., gnaw on). I'm sure it will take a long time for him to be sitting up on his own, but he seems to have very strong stomach muscles.
At his doctor's appointment, here are Lincoln's 4 month stats:
Weight 17 pounds 3 ounces (90%) (2 ounces less than Ben!)
Length 26 inches (75-90%)
Here are some pictures! 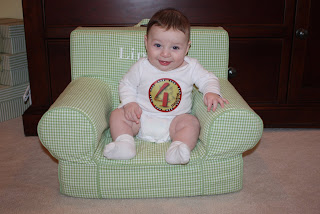 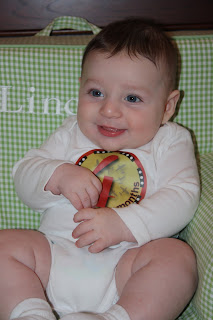 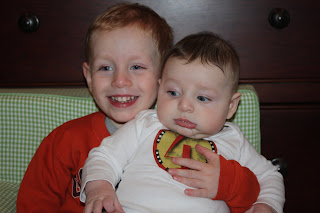 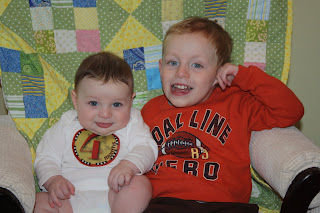 We are all home today on a lazy Saturday in October and it's SNOWING outside. Really random! They are expecting 6 inches. What is going on? 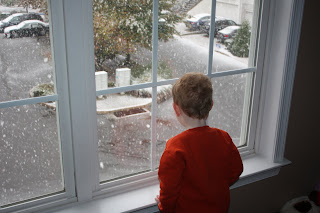 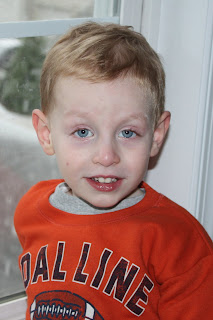 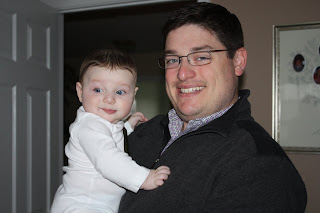