Yesterday, Ben was 17 months old. Time is FLYING! This week, we got Ben an aquadoodle and he loves carrying it around and drawing. It's the best way to have him draw because nothing gets dirty and he's not eating the crayons! Can you tell, I haven't had success with other at-home-drawing? 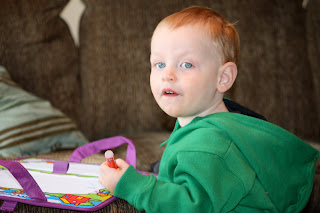 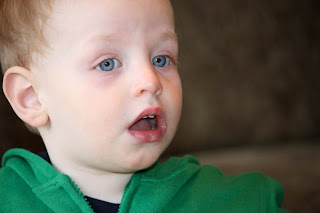 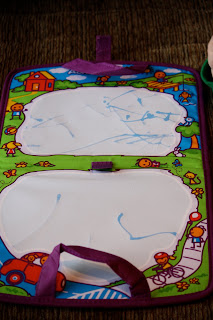 Here's a little bit of what's going on with Ben this month:
- He's WALKING!!!! A few weeks ago, we announced that Ben had taken his first steps. He's been slow moving since then...only really walking when he really wanted to. However, as of yesterday (actually on his 17 month birthday), I am proud to say that he's truly walking. When we are out, he definitely prefers to hold my finger to walk, but when we are at home, Ben is a walking machine. FINALLY! I'm sure he'll only get steadier and faster!
- I'm hesitant to say that "mama" is Ben's 2nd word. Basically, if you ask him to say anything at all, he responds confidently with "mama." So....your call. haha.
- Ben still loves playing outside and is very into his toy car, bubbles, water in a bucket, pointing/yelling at birds/animals/planes/trucks. Inside, he's still into his tunnel, books, musical instruments and balls.
- Ben has his first ear infection. The poor guy started antibiotics on Monday so hopefully he will be all better soon.
- He started getting his first molar, but it's coming in super slow.
- This isn't incredibly new, but I want to make sure I include it...he gives "fishy kisses" more willingly than regular kisses. :)
Posted by Kristin at 1:19 PM