Hello!  It's been a little while since my last update.  Last Friday, Ben had surgery to remove (what we later learned to be) a tumor from his right cheek.  Because of his age and the placement of the tumor, we had a plastic surgeon remove it and he was completely asleep during the procedure.  While it was a pretty small "surgery," it was a pretty big deal to us because he was asleep.  Nick took the day off and Kathy and Don came down to watch Lincoln.  Nick and I were so proud of Ben because he was so good.  I think he was the first person to ask to keep the mask the anesthesiologist used....and still hasn't stopped playing with it.  He calls it his oxygen mask....because he's a fireman every day.  We waited anxiously during the surgery and were there when he woke up.  I have to say it was actually quite amusing when he came out of anesthesia.  Have you even seen those You Tube videos of kids on the way home from the dentist after being under anesthesia?  I understand the reason those parents turned on the cameras.

We laid low that weekend while his cheek started to heal.  Here, Nick is cuddling with his boys while watching a movie.  Ben had his bandage on for 2 days following the surgery and then got the stitches out in two separate visits to the plastic surgeon. 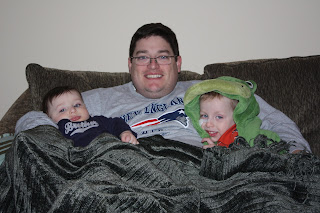 This picture is taken on Monday after the first half of the stitches were removed.  Ben was great getting the stitches removed.  I don't think his cheek bothers him at all - I have to remind him to be careful not to bump it.  I don't have pictures after he got the rest of the stitches out because he has tape on it (still).  He will be able to take the tape off on Tuesday and I can take another picture to see how much it's healed. 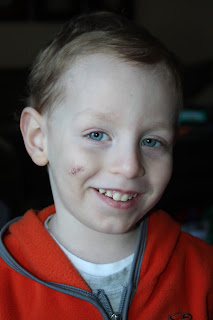 The same day, Ben and Lincoln were making some music together. :) 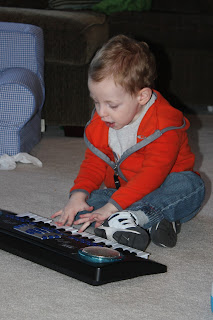 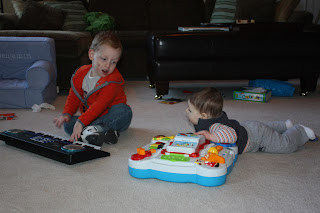 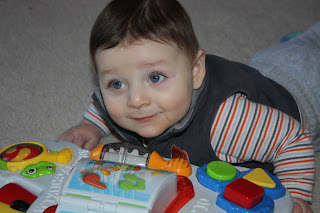