We are a little late since we were out of town, but Lincoln is now 6 months old!  The last 6 months have flown by.  We are looking forward to the next 6 months as Lincoln learns more and more about the world around him.  It's amazing how much babies learn during the first year!  Here are his 6 month photos... 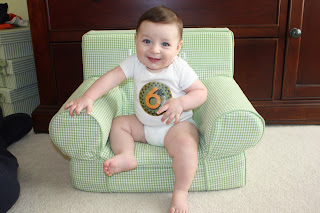 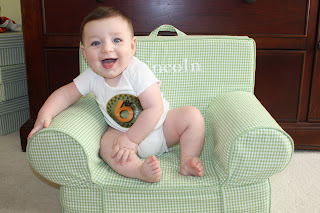 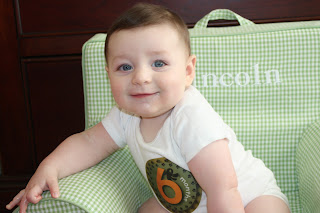 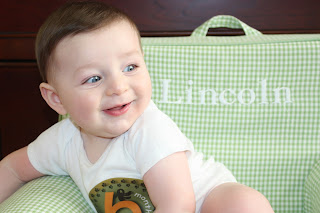 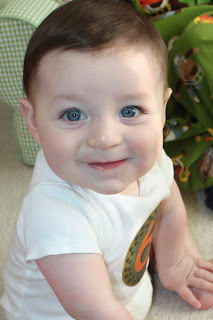 Ben was involved so I took a few of him too! 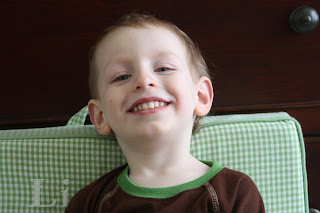 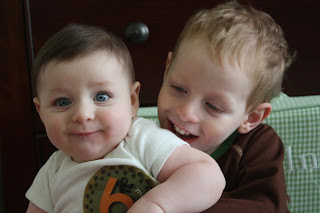 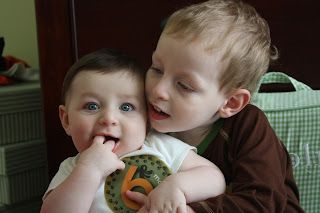 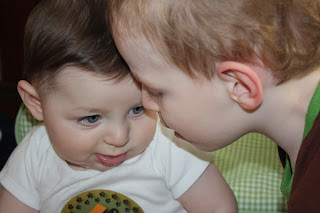 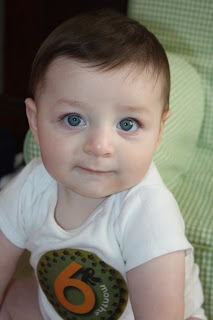 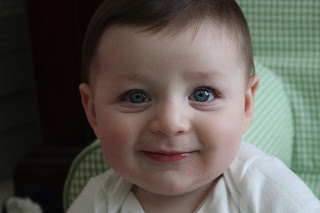 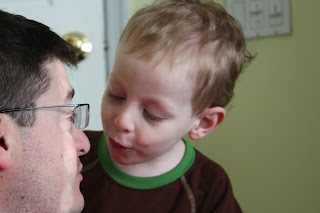 Since last month, Lincoln is a champion sitter and eater!  Here is what Lincoln is up to at 6 months...

Last month, he had just learned how to sit.  Now I can put him in a sitting position and he is very good at staying there to look around and/or play.  He does fall down sometimes...but he has really good balance and strong stomach muscles.

In terms of eating, he's had squash, sweet potatoes, peas, carrots, pears and apples in addition to oatmeal.  He seems to really like eating and is already polishing off everything we give him.  This is such a change from Ben when he started eating.  It's nice to have a baby who likes to eat!  Not sure whether it's his love of food, my general comfort with having kids, or all my free time (yeah right), but I've decided to make Lincoln's food.  I've given him store bought stuff, but if I can, I'm going to try to make as much as I can.  It's much easier than I thought.

Lincoln has spend a good part of the last month or two sick.  I hope by the next monthly update, I can report a healthy baby.  He's still very happy, but we have felt so bad for him with bronchiolitis and ear infections (each three times in the last 2 months or so).

I will not be surprised if a tooth pops through in the near future as Lincoln is gnawing on everything he can get his hands on.  So far, nothing white or pointy in his mouth though.

He giggles and talks a ton.  He also seems to interact with his brother a little bit.  I really look forward to this as he gets older.  His arm movements are becoming more and more deliberate and he turns to look at things and reacts appropriately.  He is beginning to like games like Peek A Boo and we have started giving him toys to play with.  He turns them over in his hands, waves them around, chews on them and throws them.  We had to create a whole "Lincoln toy area" in our family room.  Our house is getting more and more full!

I'm hoping we get on a more predictable schedule soon....I think we are almost there.  Seems like it is taking longer than it did with Ben....but I suppose that's because I didn't have anything else to do when Ben was a baby!  If Ben needed to sleep, I didn't go anywhere!  Sorry Lincoln!  Notes for me for later.....He is generally nursing/bottle 4-5 times a day, having 2-3 meals of food a day and taking 2-3 naps.  He goes to bed at 7:30 (eats then, sleeping probably by 8) and wakes up at 7 AM.

The (almost) bad news of the month was that on Lincoln's 6 month birthday exactly (remember, I'm 5 days late) Lincoln decided he didn't want to nurse anymore.  Granted, he was really sick, but I wasn't sure if he was just weaning himself or if he just wasn't hungry.  From what I can tell, some websites referred to it as a "nursing strike."  I'm hoping we are on the other end of it now as today was the first day he was willing to nurse again.  Let's hope it continues.  Otherwise, my pump is going to get quite a work out!

Happy 6 months, Lincoln!  We love you so much and can't wait for every new thing you learn now to do. :)