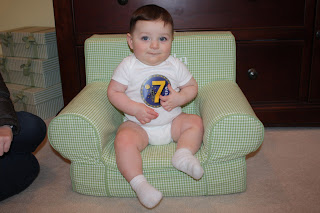 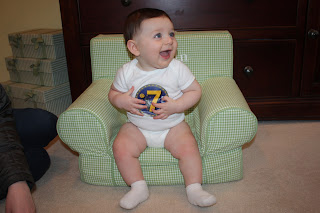 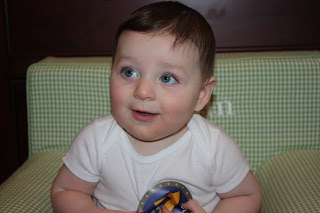 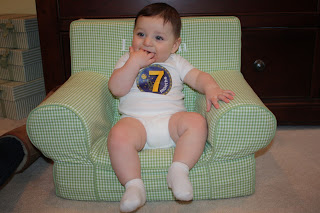 This is what Lincoln's been up to the last month...

Last month, I wrote about Lincoln's sitting.  He sits without even trying now and has learned a lot more about moving his body around.  He rolls both ways, goes from sitting to laying, laying to sitting, rotates 360 degrees, crawls backwards....and as of yesterday, crawls forward!  I'm in trouble now with baby proofing and not leaving the room when he's on the floor.  What fun he will have exploring now that he can move around!

He continues to eat better and better.  I love the way he opens his mouth like a little bird and if I'm giving him finger foods like puffs, cheerios or small pieces of pear or banana, he reminds me of an animal at a pet pet farm with the way he goes after my hand.  He even occasionally pulls my hand closer to his mouth!  He loves food and I'm now making 100% of the food I'm giving him.  It is easy and cheaper......and the funniest thing is that Ben wants to eat it too!  Pureed squash for both boys at dinner. :)

Still no teeth although I mentioned last month that he was gnawing a bunch and drooling.  Maybe in the next month.

Lincolns is VERY aware of his surroundings.  It's getting harder and harder to feed him when ANYTHING is going on in the room.  Ben playing/talking is the worst, but even his Daddy asking a question distracts him from the task at hand.  He will learn so much about the world...he doesn't want to miss a thing!

I have really committed over the last 3 weeks to getting Lincoln on a schedule.  It's been hard on all of us...even Ben as we haven't really gone anywhere too exciting.  We have been focusing on getting him on a set eating schedule (nursing 4 times a day and eating 3 meals), a regular nap schedule (we are working on 2-3 naps a day at consistent times and trying really hard to get them longer than 40 minutes at a time), and sleeping through the night (earlier bedtime - around 7, no nighttime feedings, no more partial swaddling, trying to teach him to self sooth without using a cry it out method that doesn't seem to be the right approach for him).  It's been a busy and stressful few weeks, but I AM seeing progress so I feel like we are doing something right!

I suppose this is a big month of changes for Little Lincoln.  Happy 7 months!  We love watching you learn to move. :)  I will get a video of his crawling up here soon!!

The post wouldn't be complete without Ben posing in Lincoln's chair. :) 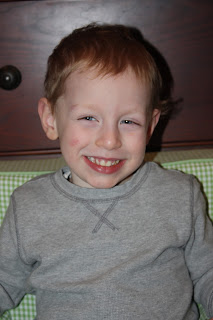